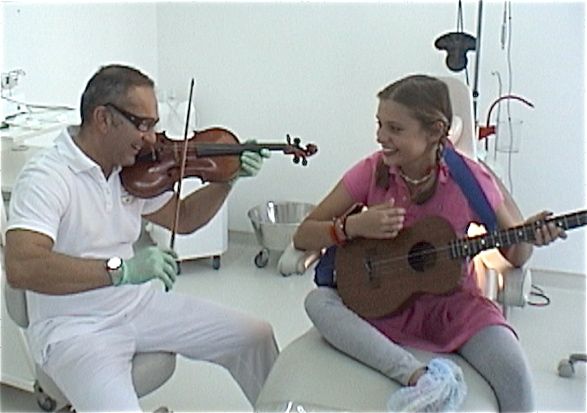 THE DENTIST CHAIR FOR ME
(song by Ann Mayo Muir, video by Emmanuelle Andrea Narayani)
My friend Emmanuelle filmed this fun video to go with my song which is a true story all about my experience when at my dentist during my early years. I loved my dentist, Dr.Don Wynnans, for all the happy moments we spent playing music together and he never hurt me. He gave me two gold inlays for my wedding present and his violin before he died. He was a dear friend to me.
We titled this "The Dentist Chair For Me." Beaupere, the dentist playing the role of Don in this film is every bit as top class, masterful, handsome and amazing as Don was. How lucky can a girl be? Ophelie, is my husband's granddaughter. She did a beautiful job playing me. Thank you Ophelie! Thank you Emmanuelle, for your vision and expertise as a Directer and Producer of this video. You really did capture the moment perfectly.
Ann's Trip to Romania set to 2 of her tunes on FaceBook
YouTube ~ "A Crisp Fall Night" by Ann

© 2004 Ann Mayo Muir Music, BMI. Backing Ann up here is the wonderful jazz/swing guitarist, Tom Mitchell.
This song tells the story of a fiddle bow (beau) searching for the fiddle of his dreams. It's inspired by many marvelous conversations with Alasdair Fraser at his Scottish Fidlde Camp , Valley of the Moon, in Santa Cruz, CA. Hear more of Tom Mitchell's great singing and playing with The Blue Rhythm Boys at his website www.yellowcarmusic.com. Thanks to the Institute of Musical Traditions for including me in their concert series. www.imtfolk.org. Find more of Ann's great music at www.AnnMayoMusic.com.

NOTES FROM ACROSS THE SEA *CD Release Concert

On YouTube ~ This video was put together by our friend Robin Rice to commemorate a magical night for Ann and Christina! One cold January night in 2010 the Grammy-nominated group, Ensemble Galilei (EGMusic.com) performed music written by Ann Mayo Muir in a glorious CD release concert for "NOTES FROM ACROSS THE SEA!"

I am constantly trying to reconcile this enormous division within myself as one part of me confronts the physical pains of aging while mentally feeling years younger. My conversation with "Forever" was deeply satisfying and comforting to me. I wrote it in order to begin healing that divided place within me * AMM

"Forever Came To My Door" is written and sung here by Ann Mayo Muir playing her baritone ukulele. The title has changed since the making of this film. With a lovely spare accompaniment by Carolyn Anderson Surrick and Sue Richards members of Ensemble Galilei, and special guest Tom Mitchell on guitar, this was one of 7 songs Ann performed at the 2010 concert for her new collaborative CD "NOTES FROM ACROSS THE SEA."

I always thought that I'd stay young forever
When forever came to my door.
"What ever made you come calling today
When I've years of tomorrows in store?"

He smiled and asked if I valued my Dreams
That were sent and were meant as a sign.
"I always believed that our dreams would come true,
So I pay close attention to mine."

Now for my prayers and I'll close my eyes
And whisper " sleep let me fall"
Back to the dreams that wait for me
Till Forever comes to call.

(Lyrics added below)
A fiddle bow is singing this song. He is off on a quest to discover a fiddle so he can play the music he loves. There is a camp in Santa Cruz especially for his type where tunes are taught by ear. But he can't learn anything till he finds the fiddle of his dreams. When the bow and the fiddle meet and marry it is a metaphor for my rejoicing in the Scottish music. ~AMM (on baritone ukulele)

Thanks to Ensemble Galilei for the accompaniment! We performed this at the big CD Release Show.

The BOW went out on a crisp fall night
With his rosined shoes wound up tight
All to find his heart's delight.
he was California bound.
He climbed the hills to Santa Cruz.
He could hardly wait till he could choose
The fiddle of his dreams so he could loose
His empty learning blues. ( but when he got there )

There were so many fiddles piled up high,
Which one was his , You could hear him sigh.
He called and back came one reply;
Darlin' I'm way down here.
He started diggin', shovin and cryin',
Wishin', pushin', lifting, pryin',
At last he found her sweetly lyin
And smilin' just for him.

She sang to him as he touched her strings.
And as he glided, his heart took wings.
they promised each other many fine things
And agreed that they would marry.
They sang sweet love songs all night long
And those who listened to their love song
Felt a joy that grew so strong
that it would last forever.

In the morning at VOM they tied the knot,
The BOW and the FIDDLE someone forgot.
They went to classes and they learned a lot,
And they come back every year.
In many ways, They're just like you.
You're full of passion and you come back too.

AMM Lyrics for Valley Of The Moon

This is Alasdair Fraser's fabulous fiddle camp in Santa Cruz, CA. It is where my love for Scottish music began. These lyrics were written to entertain my fellow campers each year I attended. I highly recommend it for all ages! ~ Ann Mayo