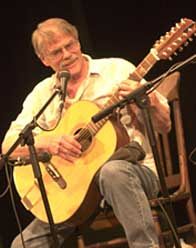 The Unitarian Society of Hartford (near U of H), 50 Bloomfield Ave., Hartford, CT

Presented by The Sounding Board. Gordon Bok, Ann Mayo Muir and Ed Trickett are not a "trio" in the usual sense. On the concert stage, each retains his or her musical identity, often performing solo songs along with those performed together. Their concerts reflect diverse tastes and experiences of music. You may hear sea songs, mountain songs and river songs, mournful tales of far-off lands, dances, stories, cantefables, all with unforgettable harmonies. 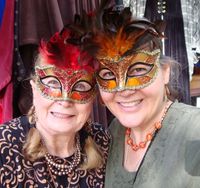 Its a great weekend of music in West River, Maryland starting Friday October 4, 2013 at 4:00 PM and going through Oct 08, 2012 at 11:00 AM! On Saturday Ann will be leading a circle for ukulele lovers, Christina will lead a circle for mountain dulcimer lovers, and then Ann and Christina together will lead a harmony workshop as well as perform a half hour mini-cocert. 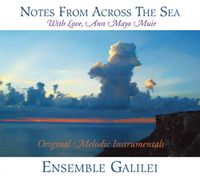 Presented by The Institute of Musical Traditions

SILVER SPRING, MD – On Sunday, October 17, 2010, the Grammy-nominated instrumental group Ensemble Galilei and musician/singer/songwriter Ann Mayo Muir celebrate the release of their new collaborative CD, Notes From Across The Sea, in a special presentation by The Institute of Musical Traditions (IMT) at the magnificent Takoma Park/Silver Spring Performing Arts Center at Montgomery College with a special appearance by Hot Soup!  Ann Mayo Muir has had a long and lustrous career as a recording artist and touring musician, most often performing with the legendary folk trio, Bok Muir & Trickett. In those years she distinguished herself as a singer, arranger and multi-instrumentalist, recording three solo albums and eleven critically acclaimed albums with the trio. Now Ann adds "Composer" to her list of accomplishments - stunning instrumental music which can be found on her new CD NOTES FROM ACROSS THE SEA. Ensemble Galilei, a highly respected Celtic/Early Music/Classical Crossover group, arranged and performs the pieces with Celtic harp (Sue Richards), fiddle Hanneke Cassel), viola (Ryan McKasson), percussion (Danny Mallon), viola da gamba (Carolyn Anderson Surrick) and guitar (by guest musician, Tom Mitchell). Of the CD Gordon Bok writes, "Some pieces feel American, many have a European twist and a couple have run off with the Gypsies...it is a sinuous, snappy, energetic delight of interpretation, with many shifts and surprises, happily suited to Annie's unique vision. With so many tastes and textures, this CD is a feast for the musical gourmet." Ann will also appear with Ensemble Galilei to sing some of her favorite songs complete with scrumptious Hot Soup harmonies! Ticket special $10 with Montgomery College ID